Let's begin - Crompton The Dog Deserves Respect, and his friends.

Adapted from a story by W M Tysoe.
Artwork by David Kelsall. 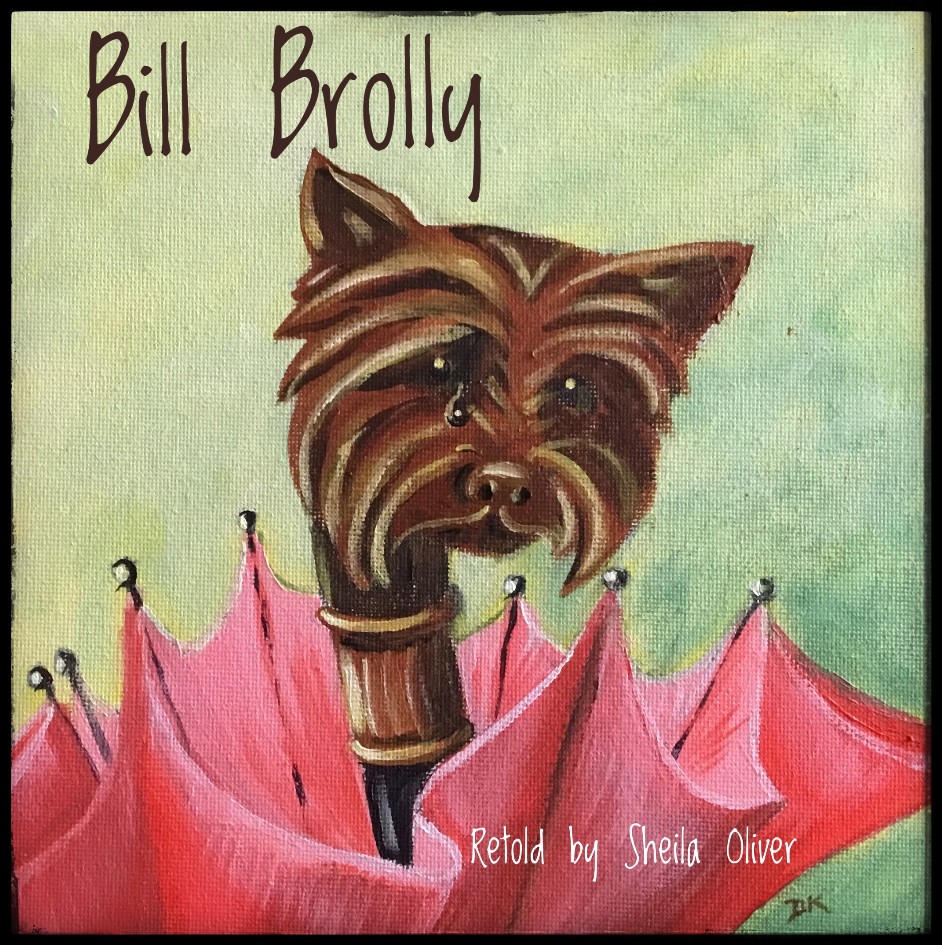 Ana was surrounded by bright, discarded paper, ribbon, cardboard and glanced-at-for-a-minute toys.  But the birthday present which really captured her was a red brolly with a Yorkie head handle.  The Yorkie face had a vaguely sad expression.  "I will call him Bill Brolly, " Ana decided. 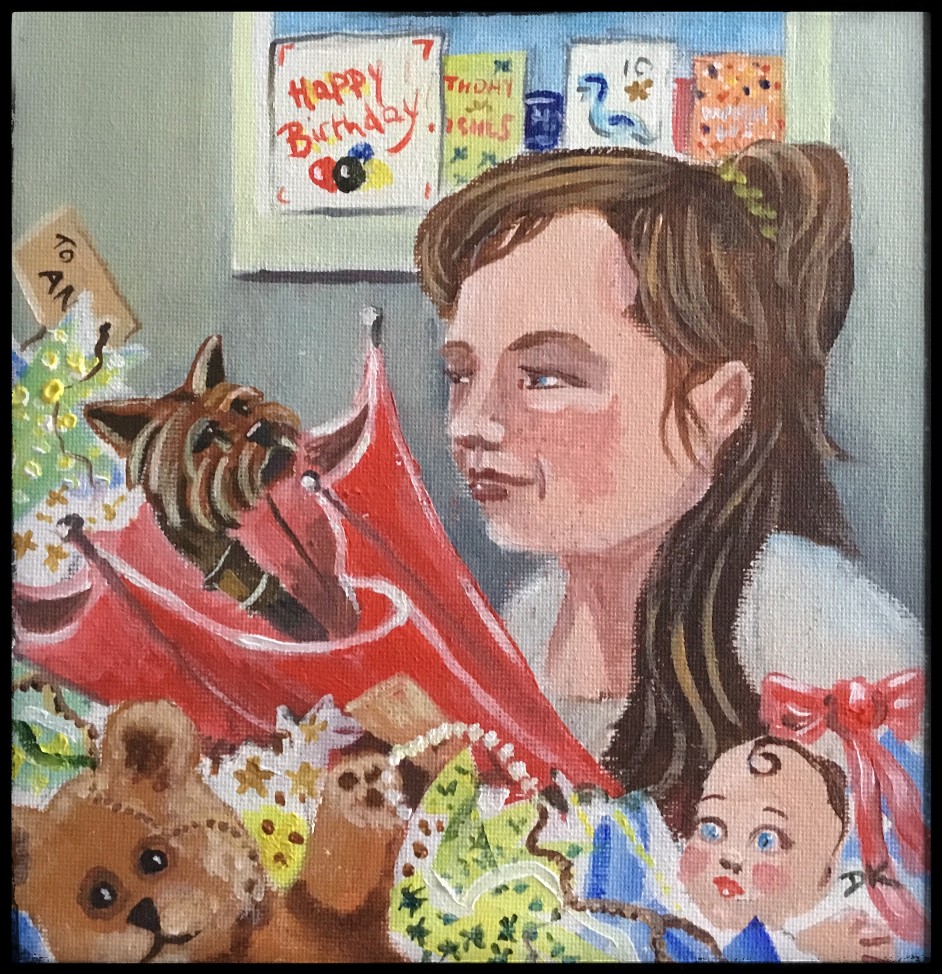 The next day Ana set off to take Aunty Winnie a piece of her birthday cake and show her the new umbrella.  She lived in a little thatched cottage next to the village green.  But just as Ana approached the green, a strange mist descended, enshrouding everything from sight. Ana was beginning to feel a little frightened and she was close to tears.  Suddenly a little face peered at her through the mist, that of a tiny, delicate creature with gossamer wings. 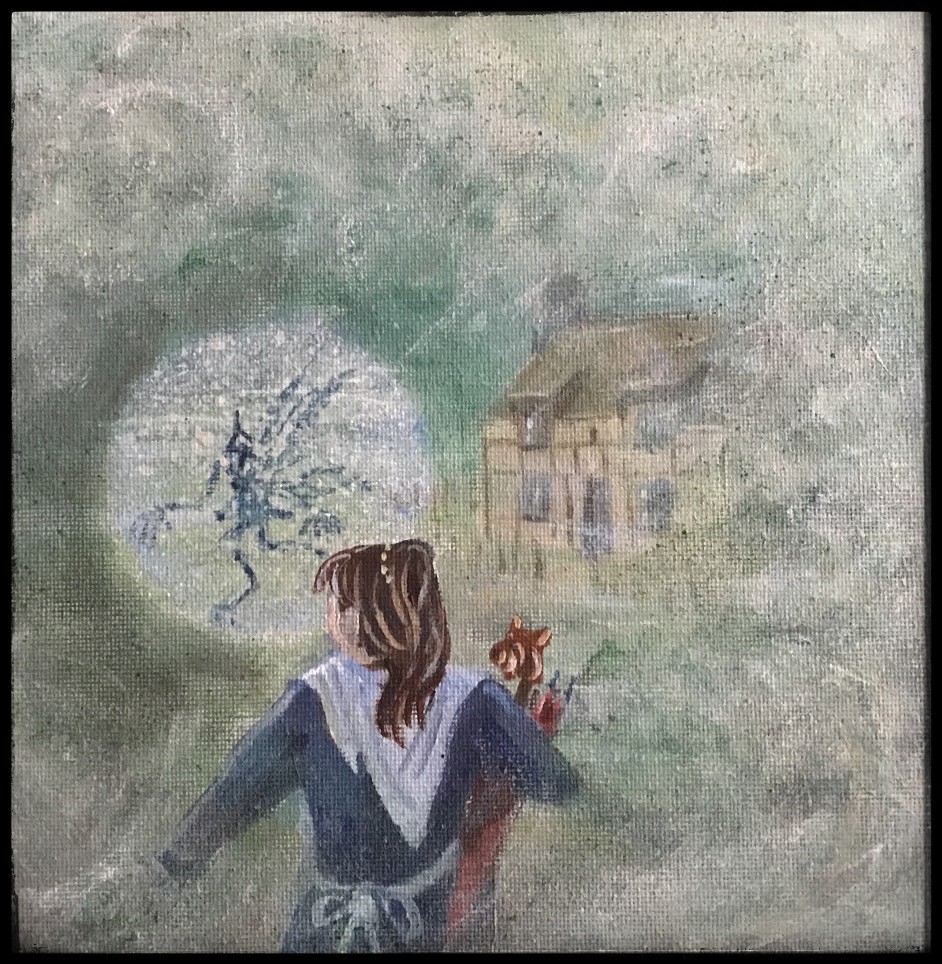 "Little girl," said the creature, "I must have your umbrella."  "No," said Ana hotly, smartly drawing the umbrella behind her back.  "It’s my birthday present."

"I saw a naughty Yorkie pup transformed into an umbrella by an angry magician, and it was your umbrella little girl," said the fairy, for that is what Ana realised she was.

"I'll teach you to yap at me," bellowed the Magician holding the Yorkie pup by its neck. The poor little thing struggled and squealed pitifully.  The Illusionist cast his spell:  "Yorkie Yorkie, Yappy Yappy, Snappy Snappy, Chappie Chappie." 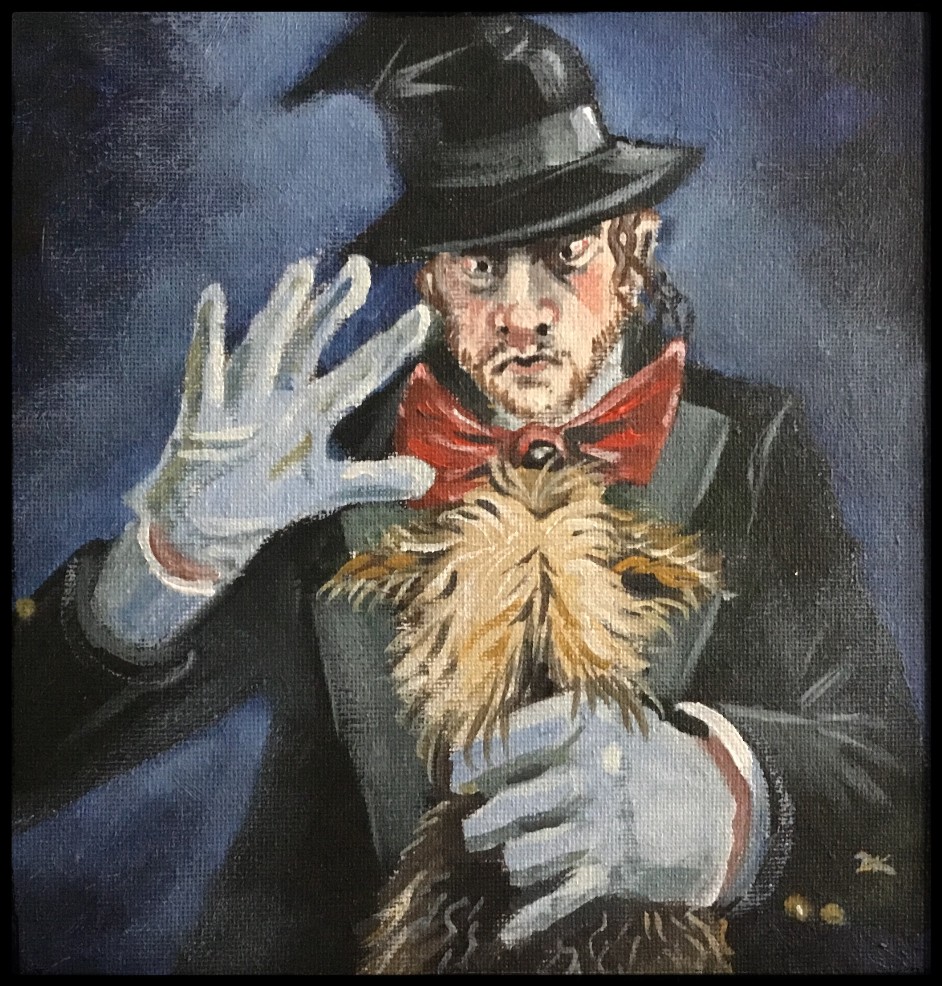 "We must rescue him; his family will be worried," said the fairy who was called Mirabelle.  "I know the Magician is seriously ill; he has Sphenopalatine Ganglioneuralgia . We must get to him quickly to reverse the hex.

"We will have to ask the Weeping Witch of Withering Wood; she will help us," said Mirabelle confidently. No other creature lived near her, for when the wood had started to wither all the animals and birds departed.  Only one spring had not dried up, and the Weeping Witch drank water from this.  The  ground was covered with dry, shrivelled twigs, which she ground into powder to eat as a cereal.

"Follow your nose and turn right when you see the rabbits," Mirabelle replied.

Off the two of them went.  After walking/flying  for about half an hour a door in a tree trunk was flung wide open.  Ana and Mirabelle went down some tiny steps .  A  periscope enabled rabbits to see what was going on above ground, and when they saw Ana and Mirabelle, they invited them into their cosy home. 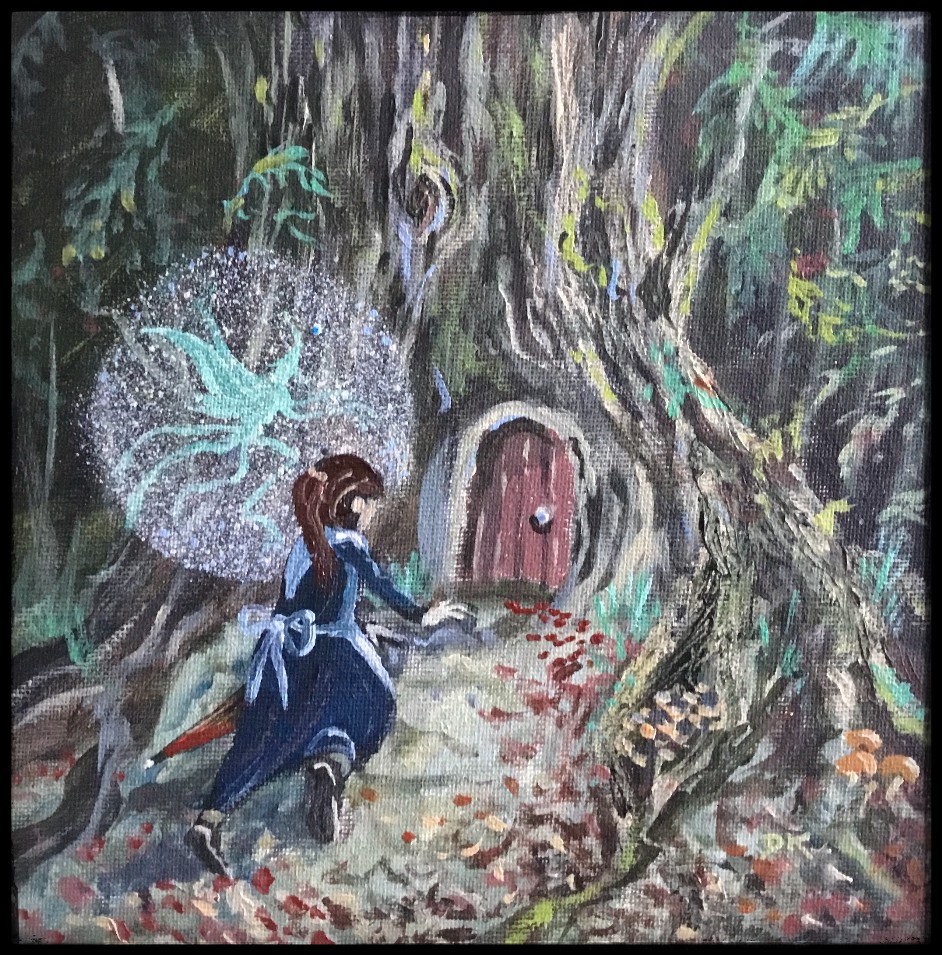 "Withering Wood is down in the valley here," said the rabbits, their noses constantly moving.  "Would you like to stay for some carrot casserole with turnip goujons in a lettuce jus?" they asked.

"Er, no thank you," said Ana very politely, and off she and Mirabelle trotted to find the Weeping Witch of Withering Wood, who was none too pleased to see them. 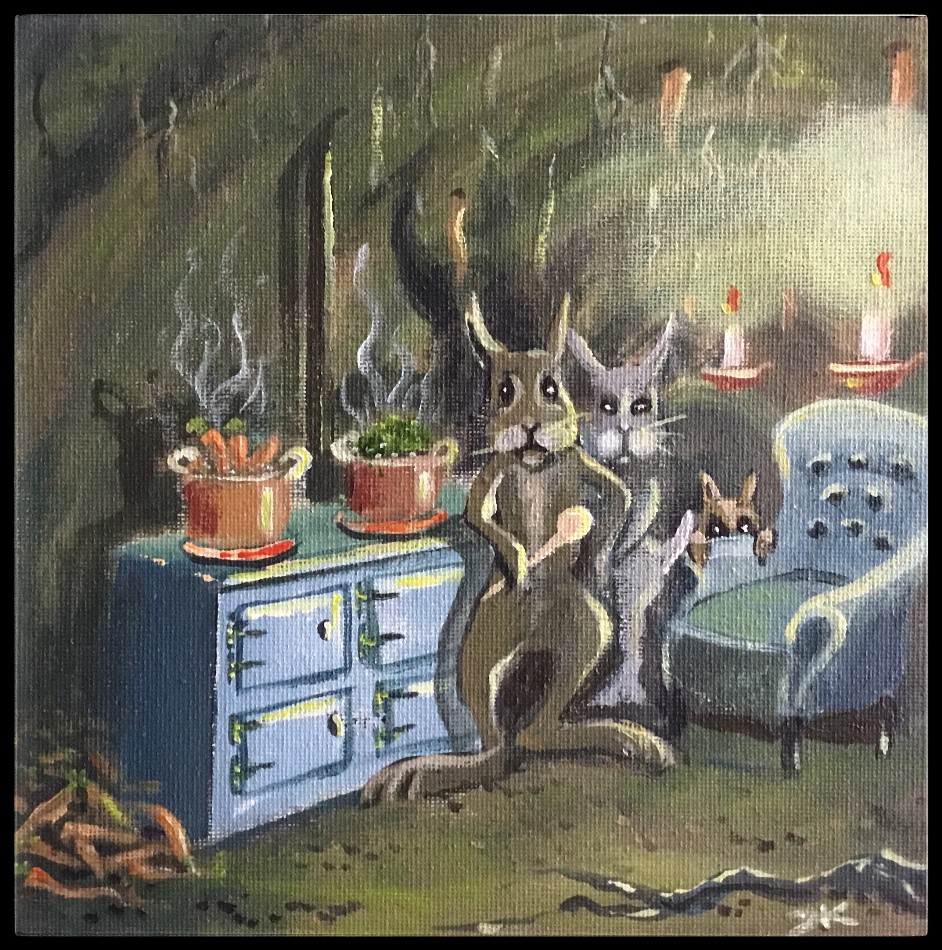 "I’m busy weeping," she said.  "And, that Yorkie was very yappy," she opined.

"But look at his sad face, " said Ana pointing at the brolly handle.  "Maybe he won’t yap anymore if he is turned back into a Yorkie dog, " she argued.

"Hmmmm," said the Weeping Witch. " You must take the little umbrella, place it beneath the Seriously Ill Magician’s white rose bush and sprinkle it with water from the magic fountain at the hour of dusk.  The magic fountain only works in conjunction with magic ring, which had previously been stolen by the giant who lives on Crotchety Mountain," she explained.  "The Magic Ring is too small for the Giant’s fingers, so he keeps it in his back pocket," she added.  "The fairy must fly up with bottle of something to drug the giant and pour the sleeping spirit into his mouth," she finished. 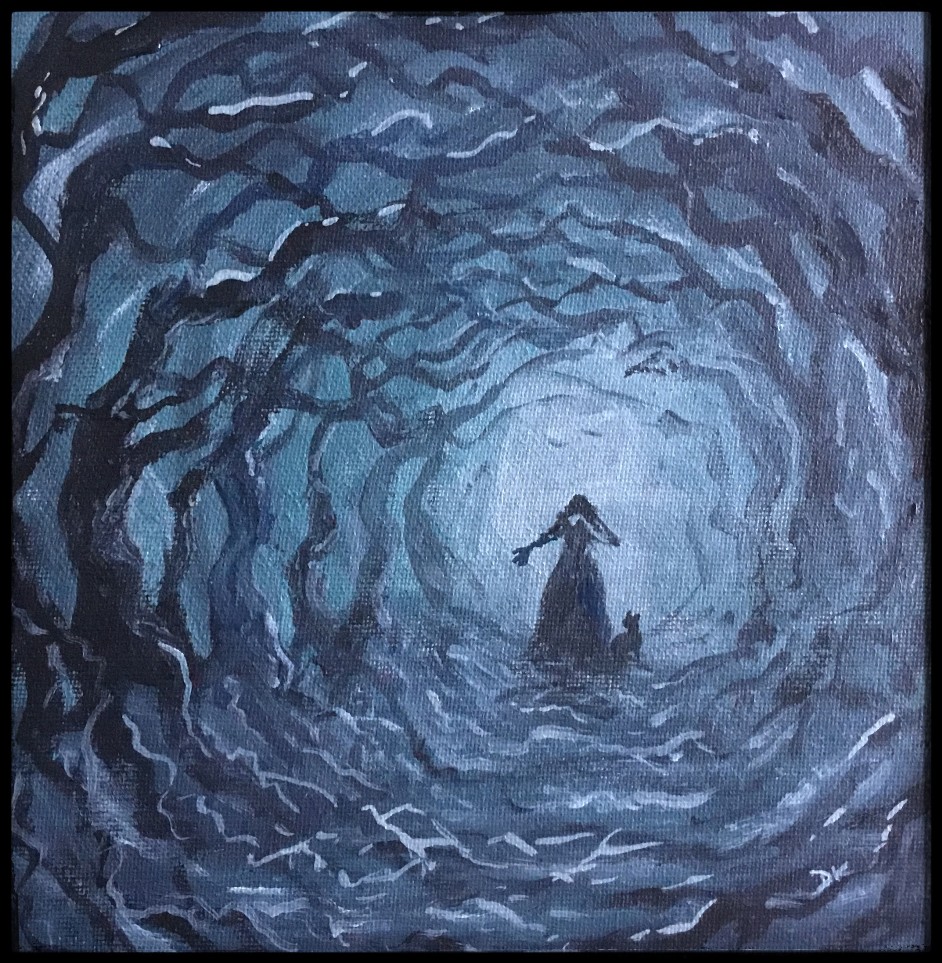 Mirabelle the fairy, clutching the precious bottle of sleeping spirit, flew low around the mountain range so as to avoid any risk of being seen by the Giant. Several times on the way she had to stop because the weight of the bottle gave her cramp in her arms. She was following the curve of the mountain range and the Silver Lake.  She felt very afraid of the ordeal before her, but she knew that she simply dare not fail.

She stopped behind a prickly mountain bush, waiting for a moment or two before she cautiously flitted to the next bush higher up the mountain, or any rock or object behind which to hide. In this manner Mirabelle made her way slowly and stealthily up the mountainside. 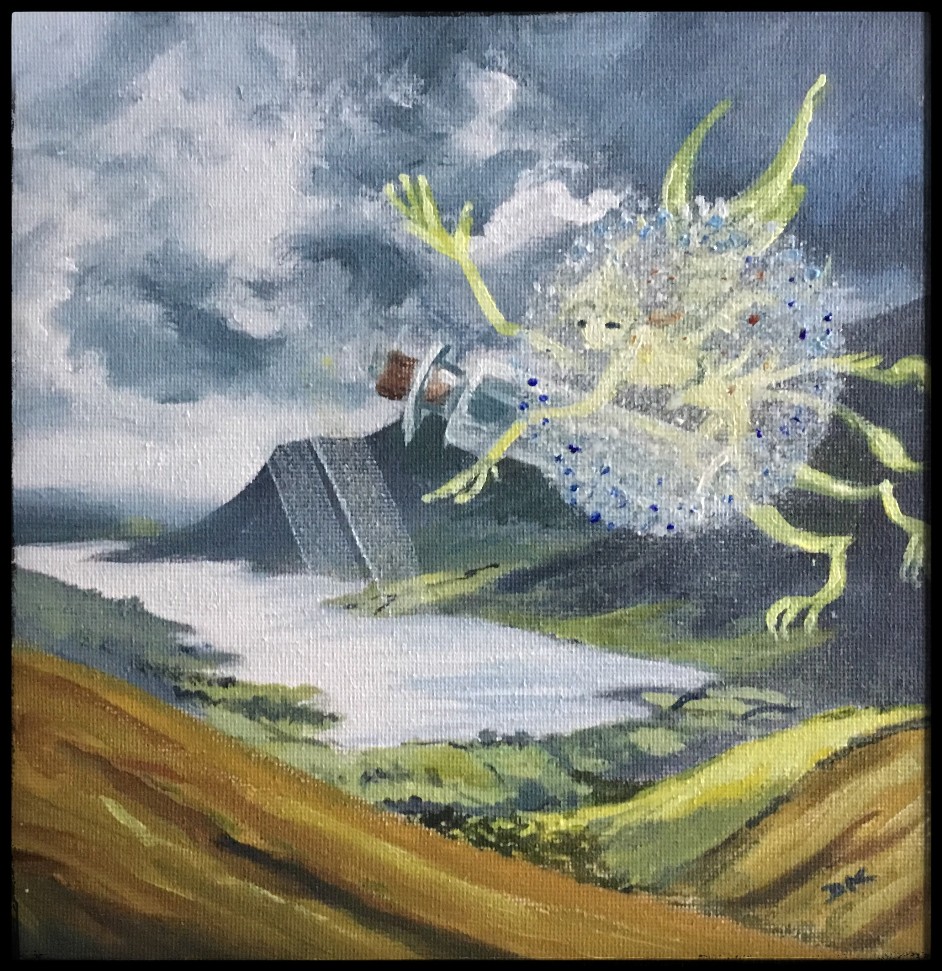 Suddenly, she saw a large shape, shuffling along the mountain path. Yes, it was the Giant.  He was looking down in her direction over a boulder. She drew back quickly fearful he had seen her.  She saw her chance and moved to a position higher up.  Now she was right behind him.  But just at that moment he must have sensed danger, or that someone was near.  He swung round suddenly and Mirabelle was face to face with the murderous-looking giant. She just had time to notice his eyes - what should have been the whites of his eyes were yellow and the irises of his eyes - that part which is normally blue, grey, hazel, green or brown - were quite jet black. 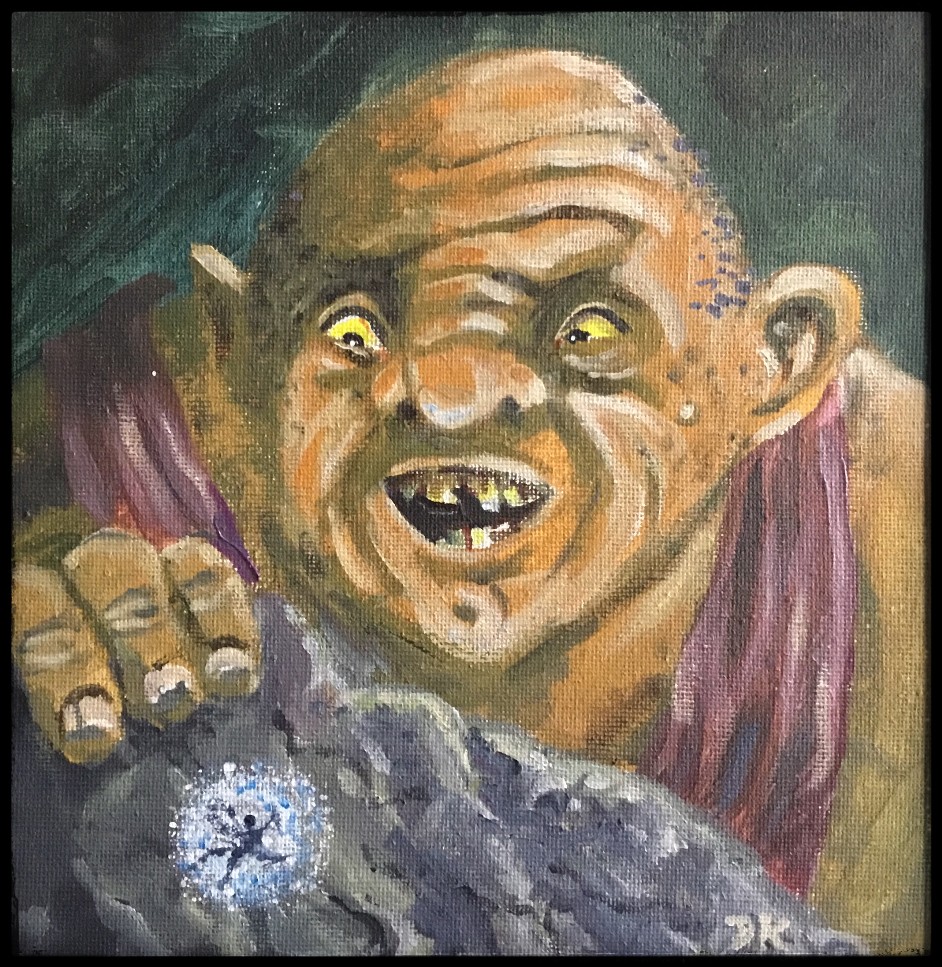 "Horrible," shuddered Mirabelle. As he reached out to grab her, like lightening she darted upwards beyond his reach, pulled the cork out of the bottle and gurgle, gurgle, gurgle down splashed the sleeping spirit all over the horrid giant.

The giant keeled over and Mirabelle took the ring out of his back pocket.

Mirabelle was totally unprepared for what happened next; for the stones beneath him started to move, and his huddled form started to slither and slide down the mountainside .  When she reached the bottom she saw that the Giant had transformed into a garden gnome.

Mirabelle flew back to Ana.  "We must now get the water from the Magic Fountain and go to the Seriously Ill Magician’s cottage. "Hurry up," she said, "it is nearly dusk".

On the way they stopped off at the Magic Fountain to get some water, which was surprisingly easy. 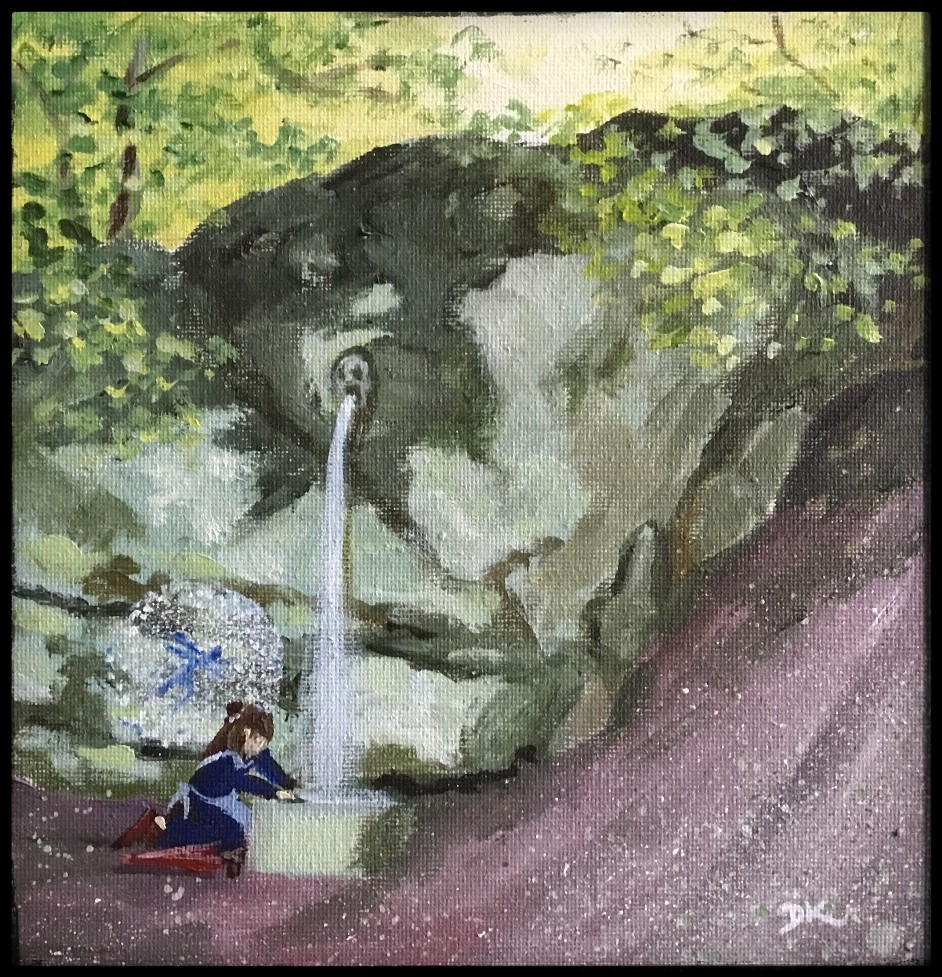 They reached the Seriously Ill Magician’s cottage next to the ice cream parlour just as the daylight was beginning to fade.  The cottage had been described as "niche-market".

Ana tried not to say it but it just popped out. "I believe you have Sphenopalatine Ganglioneuralgia," she said. "What is that exactly?"

"I get a severe headache when I eat ice cream," he replied.

"Is that serious?" asked Ana

"It is a serious illness" he responded, "because I love ice cream".

"And why do you have an ice cream cornet sticking out of the side of your face?" Ana asked.

"Because ears have Walls" he replied, somewhat confusingly.

"Please", she begged, her eyes filling with tears. " You must take the little umbrella, place it beneath your white rose bush and sprinkle it with water from the magic fountain at the hour of dusk.  The magic fountain only works in conjunction with magic ring, which had previously been stolen by the giant who lives on Crotchety Mountain.  By the way, your white rose bush has greenfly".

"I know all that, and the greenfly have to live somewhere", said the Seriously Ill Magician, who decided to reverse his spell, just so that Ana would go away and stop annoying him.  "Chappie Chappie Snappy Snappy, Yappy Yappy, Yorkie Yorkie,"

A beautiful Yorkie dog appeared and the umbrella disappeared simultaneously.  The Yorkie began snapping at the Seriously Ill Magician’s ankles and trousers, which even before this, had not been fit for purpose.

The Yorkie and his owners lived happily ever after, but a Yorkie never changes his spots and he never mended his naughty ways.